Om or not to Om - Does Yoga make you a Hindu?

Om or not to Om - Does Yoga make you a Hindu? 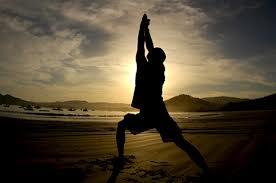 Is Yoga a Religion, Art, Science?

Following a BBC news magazine article 'Does Yoga Make You a Hindu', the latest yoga world debate is: is yoga a religion? As a yoga teacher, I have heard from suspicious beginners worried that yoga will clash with their religious beliefs, people who are not comfortable chanting OM or the hand gesture of prayer position, even a refusal from a church hall whose vicar's policy was no yoga because he thought we might be devil-worshippers!

My thoughts: You do what's right for you. If you're a practicing Christian, Jew, Muslim or another religion, if you don't feel comfortable doing 'it', chanting 'it', generating 'it', in the way that is being taught, don't over-think it, if your instincts are telling you there is something that doesn't feel like you, simply don't do it! Even better, do it the way that works within your belief system…the way that yoga was originally intended to be practiced!

You are free as a human being, to follow any path, read any books on whatever subject you choose; make up your own mind what you believe in whether that sits with your religious beliefs or not - we might have been brought within a religious community, culture, or been brought up to believe that there is no such thing as god. It's part of our personal journey, part of processing our identity, that we all ask at some time in our lives 'where on earth am I? (no pun intended), what am I doing here, what's the point of my life?'. The un-named Iranian yoga teacher in the BBC article, says that through yoga practice, the experience that she and her students were encountering was that "our minds and our bodies move closer to our faith."

There is no question that yoga originates from the Hindu philosophical texts - the Vedas, The Bhagavad Gita, the Upanishads which were steeped in the religion of the time and place. Om is a religious symbol but also a universal one, try chanting another word instead if the vibration of Om has no meaning to you or you do not wish to study its true meaning. Yoga is so multi-dimensional, metaphysical, multi-meta-amazingly-expansively supercalifragilistically, all-encompassing, its all about what your intention is for your practice, what are you choosing to practice - whether that means standing on your yoga mat, or helping another person.

The yoga texts may invite you to focus on any image that has meaning to you or none at all, on a tiny point inside the body like quantum physics, or the infinite nature of the universe like cosmology...and it is certainly not dogmatic in its approach, no down-facing dogma here thanks very much.

I love the Upanishadic story about the king who was attached to his riches but at the same time was beginning to understand the worthlessness of vast wealth and employed a yogi to instruct him in meditation. The king found he could not meditate at all, and the more he tried, the more impossible it became all he could think about and all he could see in his mind was his favourite sparkling bejewelled bracelet. So what was the yogi's advice? "Concentrate on the bracelet, its beauty and sparkling colours. The bracelet is a configuration of energy vibration solidified into metal. It is the perceptive mind which lends it its beauty and colour. Therefore, try to understand the nature of the mind which created the world as you see it."

As you see it! In other words the yogi met the student where he was, and used his preoccupations, culture, life experience, and personal history as a starting point to still his mind. I believe that yoga practices can open the door to a deeper spiritual experience, and that people who come to a yoga class (as opposed to another form of 'exercise') because subconsciously they are looking for some deeper meaning and insight on a psychological and spiritual level, even though they may be coming for a bad back or tight hamstrings.

As yoga and science teaches us, the elements are the same for every living thing - earth, water, fire, air, ether, light and what is beyond…why do we carry on separating ourselves by religion, finding differences which divide us instead of bringing greater understanding and tolerance?

Joy and peace to you all, wherever you are on your journey.